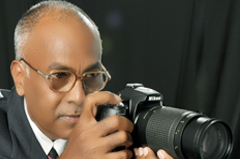 Dr. Roy has worked in various capacities in Food Corporation of India, Bhubaneswar ; Nehru Science Centre, Mumbai ; National Dairy Development Board ; Anand and O.U.A.T., Bhubaneswar. During his job of Senior Scientist at Nehru Science Centre in 1979-1981, he was a member of The Photographic Society of India at Mumbai. He has attended more than 50 seminars and workshops on photography in Mumbai. Dr. Roy has also attended seminars and workshops on photography at Delhi, Kolkata and Bhubaneswar He has interacted with and visited the photo studios of top photographers of Mumbai. Being passionate about photography, he resigned from highly paid job and set up Nataraj Studio in Bapuji Nagar, Bhubaneswar. He has trained several persons in photography who have joined different organizations and some of them have opened studios. He closed the studio after running it successfully for ten years because he found that he could not devote much time to study and develop his pet hobby if he remained busy in studio work. He was especially fascinated by digital photography which required extensive study into its technical aspects. He joined Orissa University of Agriculture and Technology in 1985. He has retired from the post of Associate Professor in Electrical Engineering in November 2011.

Dr. Roy has been taking photographs from 1967 when he was studying in D. M. School, Bhubaneswar. Several of his photographs have been published in leading local newspaper. Thus he has more than 40 years of experience in photography, as a hobbyist, as a professional and 25 years as a teacher. He has a huge collection of books, magazines and cameras which will be made available to the students for study and development of their Photographic skills.

Dr S. P. Roy is a pioneer in still photography education in Odisha. He is s self taught artist who has learned photography the hard way by studying and doing things himself. He used to develop and print his exposed roll films since 1970 when he was studying in college. He will be guiding the students personally and grooming them to become thorough professionals in this field.